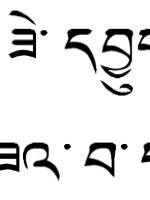 The TeX Showcase webpage is edited by Gerben Wierda and provides a wonderful selection of examples of the use of TeX, the typesetting engine. It includes examples of general typesetting, graphics, dynamical documents, mathematics, languages of the world, and miscellaneous typesetting work done with TeX. See http://www.tug.org/texshowcase/.


The figure at the left is a sample of Tibetan text, which describes the story of Brahman and his family. It was submitted to the TeX Showcase by Norbert Preining.

A history recap and update on TEXLIVE was to have been presented at TUG 2003, but we ran short of time. Here are The Occult Secrets of TEXLIVE, prepared by Sebastian Rahtz and Fabrice Popineau for TUG 2003.

We are extremely grateful for the hard work that Sebastian Rahtz and the TEXLIVE team do each year to produce a release of a complete TeX system, comprised of free software.

Special thanks to Malcolm Clark for sponsoring the TeXware Bibby drawing. Malcolm has given permission for it to be used in the annual TeX calendar produced by "TeX Merchandising Project", and for TUG/LUGs to use it for promotion of TeXLive. The original drawing will be presented to Sebastian Rahtz in a private ceremony in the UK, as a tribute to his outstanding leadership.

Many thanks to Martin Schröder who produced the impressive large poster prints of the TeXware drawing and the two giant poster reminders that ``TeX Needs You''. Martin is responsible for the TeX Merchandising Project which sells annual calendars, plush lion toys and other promotional TeX items.

The Grand Wizard and the plush TeX Lion

A big thank you to my friend, Cici Koenig (Caltech), who volunteered (and was not coerced) to print the Welcome and Registration posters and the Schedules that were on display at the registration front desk. Cici came to the rescue the week before the conference started.